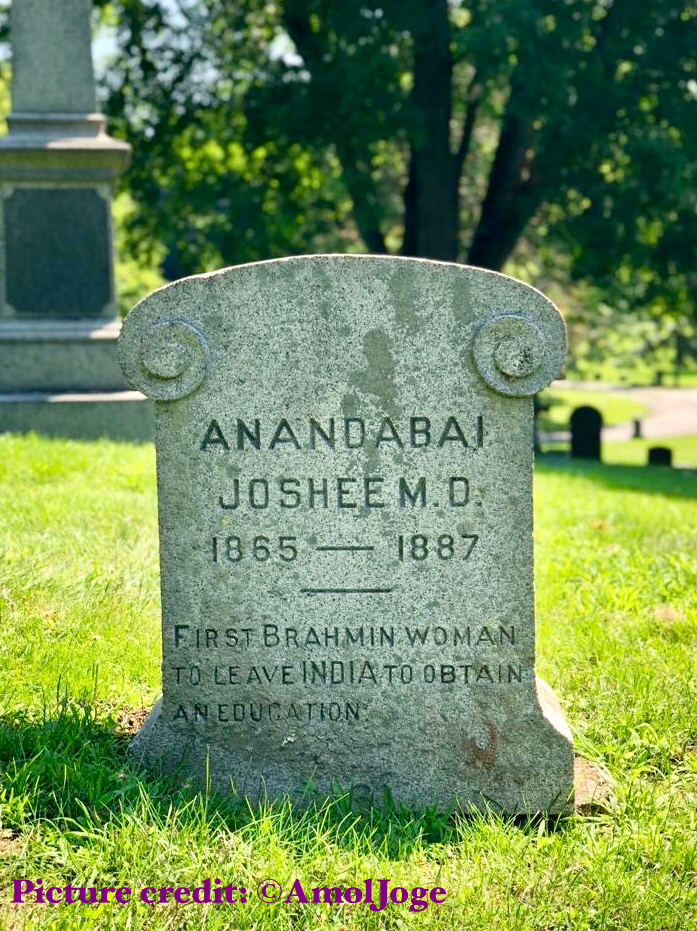 Anandibai Joshi, isn’t it quite a familiar name for all of us who studied or grew up in Maharashtra? In fact, many people in India have heard this name in one way or another. However, many of us don’t know much about her except she was the first Indian woman who went to (or should I say ‘came to’) United States for higher education or some people know her as simply the first Indian woman to become a doctor, but believe me, there is more to the story and its really fascinating if you read about the struggle and circumstances under she travelled to the United States and completed her higher education. Well, I didn’t know her story either until a few months ago when one of our family friends, Mr. & Mrs. Sardesai mentioned about her and her memorial/headstone being in a cemetery in Poughkeepsie, NY. It was kind of a pleasant shock for us because who would have thought that an Indian (especially Marathi) woman who came to the US for advanced studies will have her monument here in the USA, so that night, I started reading about her on Wikipedia and few other websites and decided to visit the memorial to pay homage.

A little bit about Anandibai:
Anandibai was born in a Brahmin family in Kalyan, near Mumbai on March 31st, 1865. Named Yamuna at birth, she was married at the age of nine to Gopalrao Joshi, a widower almost 20 years older than her. Gopalrao Joshi was a postal clerk and was a progressive thinker who was in support of education for women. He changed her name to ‘Anandibai’ after marriage and inspired and supported her to further her education. He was transferred from Kalyan to Alibagh and then to Calcutta. He sent her to mission schools whenever possible but took it upon himself to teach her English. He often would take her for long walks during which his teaching sessions continued. He was convinced that learning English was more important than learning Sanskrit. But Anandibai confessed that learning from her husband was not easy. He would hit her with pieces of wood or chairs or books sometimes.

Anandibai delivered a child at fourteen. The boy lived for only ten days as both mom and baby did not receive proper medical care. This was the beginning of her ill-health, but the event made her determined to become a doctor so that she could help other Hindu women in need. Gopalrao fully supported her decision and also wanted to send her abroad for medical studies, even though they had no money. But here was a woman who believed that whatever the circumstances, nothing or nobody could stand in the way of her achieving her dreams. Her determination coupled with her husband’s encouragement was the first step towards achievement.

Gopalrao wrote to a missionary friend Royal Wilder in the US, asking for help to admit Anandibai to a medical school, and also find a job for himself. The missionary was willing to help on one condition, that they convert to Christianity. This was unacceptable to the couple. However, Wilder was good enough to publish Gopal’s letter in the Princeton Missionary Review. A woman named Theodosia Carpenter was touched by the earnestness of the letter. She offered to accommodate Anandibai when she came to the US. She struck up a correspondence with the girl, and they became good friends through their epistolary exchanges. They discussed Hindu culture and religion. They exchanged views on early marriages and the effect this had on women’s health, of the status of women in society and various other women’s issues. Anandibai’s clarity of thought on such issues was very mature. She was a feminist and believed that she had a right to live and grow and follow her heart.

Theodosia brought out the best in her. But Anandibai’s health began to deteriorate. While in Calcutta she suffered from fever, breathlessness and general debility. The medicines that Theodosia sent did not do much good. Gopalrao however, was determined to send her to the USA for her medical studies. There was much opposition from the conservative Hindu community. They were insulted, ostracized and sometimes physically attacked. In a letter to Theodosia she wrote,

“My designs meet with the approbation of a few, say one or two thousands. They are probably youth, reformists and patriots. I am not discouraged. I must not fear but show all, what Indian ladies are.”

Anandibai addressed the opponents in her community about the urgent need for female Hindu doctors. She talked convincingly about her son’s death and her own ill-health because there was no Hindu doctor to care for her. She also promised that she would never convert to Christianity. Her speech made an impact on the community. Donations began to pour in. Even the Viceroy made a donation of two hundred rupees.

In June 1883 at the age of nineteen, a weak but determined Anandibai sailed to the USA, chaperoned by two friends of Theodosia. She got admission to the first Women’s Medical Program offered by the University of Pennsylvania. She even won a scholarship of $ 600/- for three years. Her dissertation was on “Obstetrics among the Hindu Aryans.”

Anandibai in her 9-yard Maharashtrian sari must have been something of an oddity. With her arms and calves exposed, the cold was unbearable. In this weak state, she contracted Tuberculosis. But in spite of ill health, she persevered with her studies. She graduated on 11th March 1886. Her husband, Gopalrao and a social reformer Pandita Ramabai were present at this function. Even Queen Victoria sent her a congratulatory message. The Philadelphia Post wrote, “Little Mrs. Joshee who graduated with high honors in her class, received quite an ovation.”

Anandibai sailed back to India on October 9, 1886 and received a rousing welcome on arrival. She was made physician in charge of the female ward in Albert Edward Hospital, Kolhapur. But her professional life was short lived. Illness claimed her on February 26th, 1887, at the early age of 22. As per Theodosia’s request, Gopalrao sent her ashes back to USA to be laid to rest in Theodosia Carpenter’s family plot at the Poughkeepsie Cemetery.

Here was a brave child-woman whose determination empowered her, but her frail body gave out prematurely. Her last words were “I did all that I could.”    We visited Anandibai’s monument on August 5th, 2018 and paid our heartfelt homage. It’s really mesmerizing to read about such a great lady who fought against the odds and set an example through her determination and courage.

The research and the views expressed in this article are solely by the author. AMM does not claim any responsibility for its authenticity or endorse them and provides this blog as a platform for the readers. If you have any comments please send them directly to Amol Joge (amoljoge@gmail.com ).

Scroll back to top